How to measure network latency: the 5 best tools

Top 5 Network Latency Test Tools. We will explain how five common network latency test tools work so you can choose the right one to test the latency of your internet connection and application. 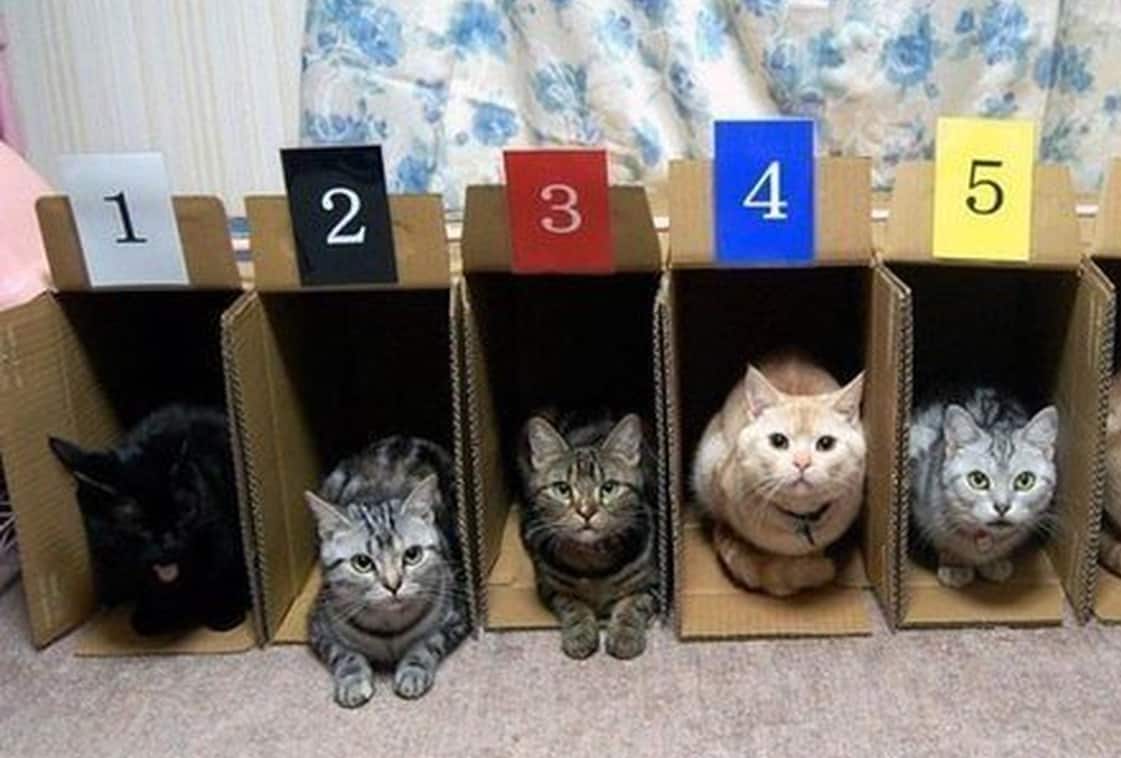 Why test internet latency? Application latency has a large impact on user experience for web sites and applications. Testing latency provides insight into its origin. With the right tools you can determine if latency is caused by the internet or your network, your device or browser or the server or site you are connecting to. This article explains how to check internet latency, how to test latency and improve the user experience of your employees and website visitors.

We will explain how five common network latency test tools work so you can choose the right one to test the latency of your internet connection and application. Online latency test sites are not usually precise enough to reveal the cause, so let’s take a look at how to test latency like a pro!

The most common internet latency test tools are:

Ping and traceroute are latency tests you can perform from your PC. They can be used to test online and internet latency as well as to check latency in your local network.

Ping is the simplest approach to test network latency from your computer.

Ping is a standard latency test tool available on all operating systems. It measures the round trip time (RTT) between your PC and the target you specify (domain or IP address). RTT is the time it takes for the ping packet to reach the target plus the time it takes to return the result, so it measures the total latency to get a response from a server, PC, router or internet site.

To use ping open a console or terminal window and type ping domain. If you provide a domain name (like google.com) ping will first verify that it can resolve the domain and report back its corresponding IP address. You can alternatively provide the IP address of the server you want to test latency to.

The following example shows that the minimum, maximum and average round trip latency times are 20ms, 24ms and 21ms respectively.

By default, a ping command tests latency by sending four ICMP Echo Request packets to the destination which responds back with ICMP Echo Reply packets which are then used to calculate latency.

The main advantage of this method is its simplicity. You do not need anything installed on your PC to test internet latency to any domain, or network latency to any IP address. It’s a good way to check if latency is a problem.

First, for security reasons, ICMP packets may be blocked by an intermediate firewall. In this case, the target will never respond to your ICMP Echo Request and you will not be able to measure the network latency.

Second, the ICMP protocol may be handled with low priority by intermediate routers, distorting the accuracy of the latency measurements.

As an alternative to ping, you can check network latency with traceroute. This approach to testing latency is also available on all operating systems. From a terminal window, use these commands:

Traceroute uses the TTL (Time To Live) field of IP packets to discover intermediate routers between a source and a destination. This technique tests latency to each hop along the network path and identifies them by IP address as it tests. This provides more insight into the origin of network latency problems.

The principle is simple. Each time a router forwards a packet its corresponding TTL field value is decremented by 1. When this value reaches 1, the router drops the packet and sends an ICMP Error message “TTL exceeded in transit” back to the source. This mechanism is used to prevent packets from looping indefinitely, which may cause the whole network to crash. In this case traceroute is taking advantage of this behaviour to check latency to intermediate locations.

Receiving ICMP packets back from intermediate routers allows the source to discover them as well as measure the network latency to reach them. 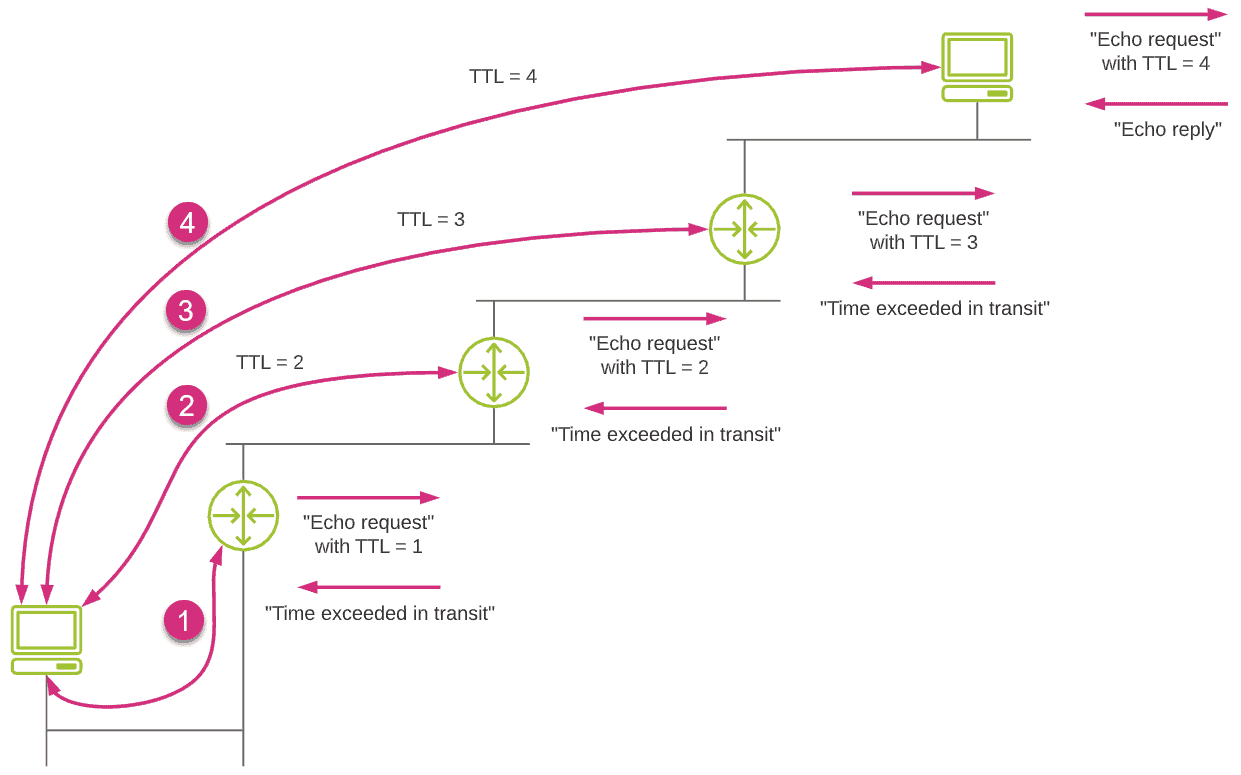 In its simplest form, traceroute uses ICMP protocol (Echo Request) for sending packets to test latency and discover the hops along the network path. Some routers may not respond to ICMP packets for security reasons. This means that latency testing will stop at this point, preventing you from checking latency end-to-end. You can see this in the image below.

You can also see that traceroute sends four packets per hop by default on a Windows platform.

More advanced implementations also use UDP or TCP transport protocols, and offer more options (packet size, probe interval, number of probes per hop, …). This ensures  that your latency tests are better aligned with real network traffic and the way that it’s routed. Nevertheless, all traceroute implementations still rely on the ICMP Echo Reply messages that are often processed with much lower priorities, impacting accuracy the same way ping latency tests are affected.

The main benefits of traceroute are:

Traceroute comes with some limitations:

More advanced synthetic latency testing techniques get around the problems introduced by testing latency with low priority ICMP packets, as well as the limitation of round trip latency measurements. Here are three of the most common.

OWAMP stands for One-Way Active Measurement Protocol. It is standardized under RFC 4656.

Compared to ping/traceroute, OWAMP tests network latency in one direction and does not rely on the ICMP protocol to calculate latency.

OWAMP provides more precise network latency measurements by using UDP packets to test latency in one direction. You can fine tune your latency tests to better align with your specific requirements and use case. For example, you can define the size of latency test packets, the interval between two consecutive packets in a test, as well as the number of packets per test.

And of course, it is easy to check if network latency is occurring in only one direction by performing an OWAMP latency test in each direction.

OWAMP latency test results are also more detailed than ping or traceroute. It provides the minimum, median, and maximum value of the network latency between your source and the targeted destination (as well as other useful data like one-way jitter and packet loss).

So is OWAMP the ultimate way to test internet latency?

The answer is “Yes”, but only if you have OWAMP testing capabilities at both ends of the network connection. OWAMP requires the implementation of a client/server latency test architecture. A piece of software must be installed on both the source and the destination for the OWAMP latency test to work. Moreover, to get accurate one-way latency test results, both latency test points must have properly synchronized clocks. Some telecom-grade routers have native OWAMP support built in, but clock synchronization will still require a time server supporting a standard protocol like IEEE 1588v2 (PTP).

TWAMP, which stands for Two-Way Active Measurement Protocol, is a variation of OWAMP. It is standardized under RFC 5357.

If you want to check latency in both directions at the same time, TWAMP is the answer.

TWAMP tests latency by first using TCP to establish a connection between the source and destination, then uses UDP packets to monitor the latency. It also uses a client/server architecture and requires that the endpoints support the TWAMP latency test protocol.

As a variation of OWAMP, TWAMP share the same latency test advantages and disadvantages:

iPerf, now in its thirdversion (iPerf3), is complementary to OWAMP and TWAMP. However, iPerf doesn’t test latency, as it is primarily designed to test throughput and packet transmission. iPerf is the technique frequently used for network speed testing by a variety of network test tools online.

iPerf also uses a client/server model where data can be analyzed from both ends. iPerf measures throughput, jitter and packet loss.

In short, there is no best way to test latency. The test tool you pick should reflect your needs, as well as your ability to instrument both ends of the connection.

How to Test Latency – Conclusions

Being able to correctly test network latency is a key aspect to monitoring, troubleshooting and optimizing the performance and user experience of applications.

You can do simple latency tests with ping or traceroute commands from any PC, but bear in mind that these techniques suffer from some significant latency test limitations:

On the other hand, if you manage both ends of the test a better option would be to use OWAMP or TWAMP to test latency. The measurements will be more precise, and you will be able to detect latency problems in each direction independently. It’s not easy to implement and orchestrate these latency tests in a distributed, complex production environment, so it’s typically used only by telecom service providers where network latency is critical to performance of their production networks.

At Kadiska we find network latency, internet latency and application latency a fascinating topic! Our solution uses a combination of advanced traceroute techniques and real user monitoring to identify the source of latency across end-to-end infrastructure from user device to modern SaaS and web applications, including the public and hybrid networks that connect them.

Learn more about latency monitoring with these resources: