What is network latency? How it works and how to reduce it ?

First, latency is the  delay for a packet to travel on a network from one point to another. In most cases, we will refer to network latency as the time needed for a packet to move from a client / user to a server across the network.

Anyone delivering applications over networks sees network response time as a critical factor for digital experience.

What is network latency? A definition

First, latency is the  delay for a packet to travel on a network from one point to another. In most cases, we will refer to network latency as the time needed for a packet to move from a client / user to a server across the network.

Secondly, there are multiple ways to measure network latency: 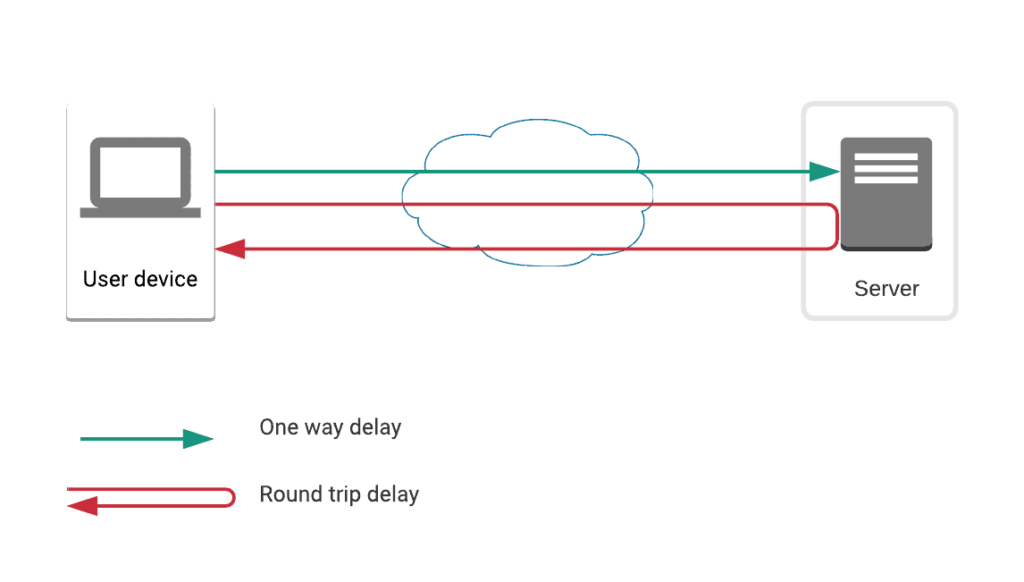 Depending on how you are try to measure latency, you will get either a round trip delay or a one way delay metric. As the conditions on the network vary and may be different in both directions, both types of measurements have pros and cons.

How to measure network latency?

Let’s look at the different ways to measure latency.

Capturing packets will give a feel for round trip delay provided you capture TCP based traffic. The TCP/IP protocol includes an acknowledgment mechanism, which can be a good basis to evaluate the two way latency between a client and a server.

This approach has 2 significant drawbacks:

The metrics you can expect:

A side note on network latency measurement based on traffic capture: on UDP on can easily monitor Jitter (put in simple words the standard variation of latency) but cannot measure latency this way.

Put in a few words, you can measure latency with a traffic based approach by capturing traffic. The pro is that you do not need to control any of the two ends. The main inconvenient is that the metric is particularly imprecise.

You can also test your network latency by emitting packets and checking the time needed for them to make the one way or two way trip.

The client computer will use the timestamps corresponding to the emission of the Echo Request and the reception of the Echo reply to calculate the round trip time.

The cons of ICMP are:

You can send TCP or UDP packets and validate the reception of the packets.

The pro is that it is possible to measure one way latency and get more precise results.

The constraint is that you either need to have control of both ends or to use a testing protocol which has to be supported by both ends, for example TWAMP.

How it works: what drives network latency?

The 4 main factors that drive latency are:

This is the time required for a packet to go from one interface of a network device to another network device’s interface over a cable. The rules of physics drive this factor, so you can expect it to be very stable (approximately the speed of light x 2/3). Put in a few words, the shorter the distance you need to cover in  your network, the lower latency you will get.

The serialization time on a network equipment is the time needed for a packet to be serialized for transmission on a cable. It depends on the packet size but remains constant and relatively negligible.

The processing time is a lot more variable on each network router or equipment on the network path. It depends on:

When considering the overall path, the number of hops / routers the traffic goes through will impact the overall time necessary for all the serialization and processing included in the total network latency.

This is the time spent on average by every packet in the router queue.

It mostly depends on the size of the queue.

The size of the queue depends on the overall traffic size (vs its capacity) and its burstiness.

Longer queues will translate in additional latency and jitter.

How does it translate in latency for an overall network path?

The drivers for the end to end network path will be by decreasing order of importance:

Drivers and main factors influencing them

Geographical distance on the overall network path drives that time.

The overall processing time depends on:

The overall queueing time depends on:

The overall serialization time depends on: